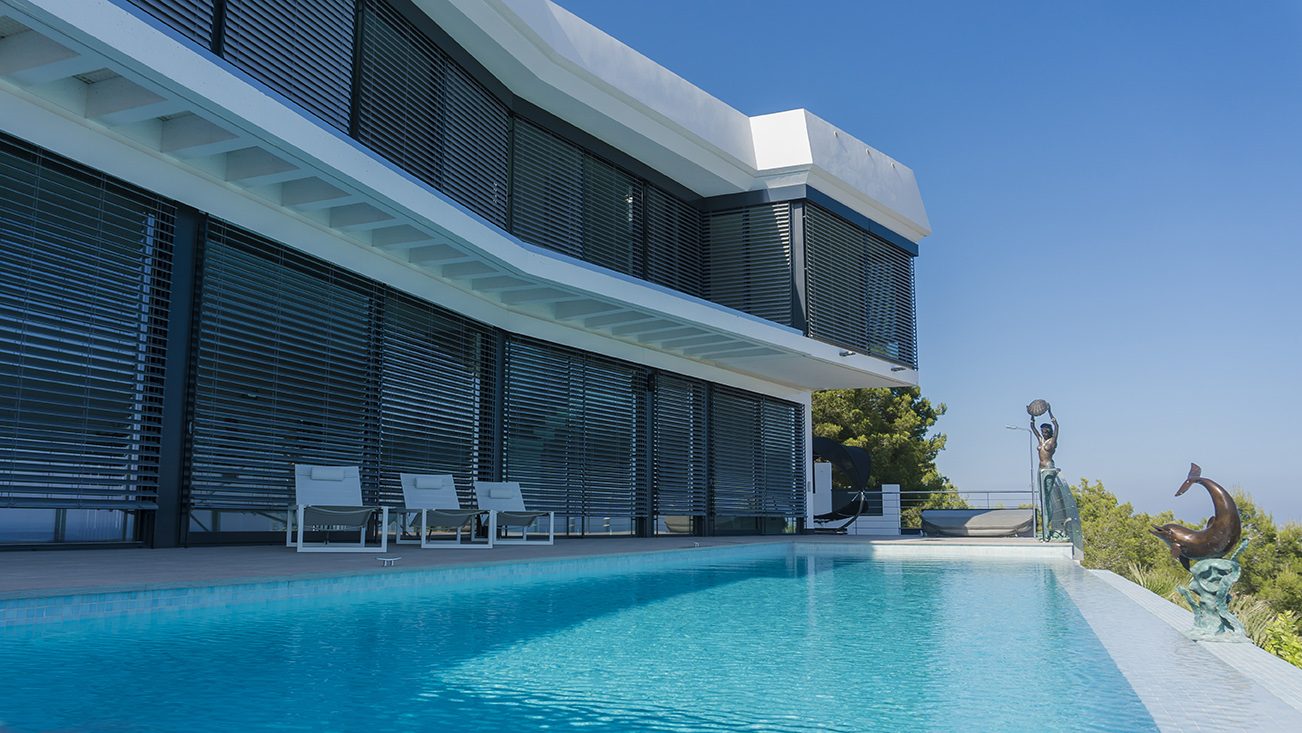 Today, modern architecture is one of the most demanded architectural styles for the construction of chalets, villas or single-family homes in Costa Blanca. To know a little more about the beginning of this style, it is necessary to name one of its founders: Le Corbusier. He was a French architect known as the main protagonist of the international architectural renovation of the twentieth century. He stated that the house should be at the service of life: “The house is a living machine, bathrooms, sun, hot and cold water, adjustable temperature, conservation of food, hygiene, beauty through convenient proportions.”

Le Corbusier established five basic principles that are still taken into account today and became the basis of architectural rationalism:

Each and every one of these points within the geometric order to achieve what he called “pure volumes.” His purpose was to merge nature with technological development. This goal is and remains one of the basic principles of Arquifach, architectural studio, moving it to a unique environment such as Costa Blanca.

Villa La Roche: One of the first houses with a modern architectural style

This house was built in Paris during the second decade of the XX century at the request of Le Corbusier. Its design supposes a rupture of the classic hierarchy based on the movement. The Villa was planned taking into account the vegetation that surrounded the environment and all the surrounding trees were kept. Its composition is based on two rectangular volumes that together form a 90º angle. One of the blocks is characterized by a broad curved front. Its totally white facade contrasts with the variety of intense colors of its interior, harmonizing with the asymmetrical spaces and the volumes that are kept inside where we find double heights, interior balconies and ramps that divide the space without breaking the balance of the Villa. Architectural principles of Arquifach for the construction of modern villas

Adaptation to the landscape: it consists of respecting the environment where the construction is located and integrating into the land the most efficient way possible. Houses must adapt to the land and be integrated into its slopes and its peculiarities.

Glass walls: one of the main characteristics of the Mediterranean area is light and that clarity should be transferred to the design of the spaces by transforming the walls into glass through continuous windows.

Geometric volumes: located on the outside and inside to divide and adapt the spaces to the needs of the client.

The Modern Villas of Arquifach: architectural studio in Costa Blanca

A modern and futuristic 330 m2 house with four bedrooms, four bathrooms and a toilet, plus a large living room with open kitchen, a large terrace with porch and infinity pool. A Modern architecture 370m2 house with a gym and a garage in its basement, three bedrooms, three bathrooms and a toilet. BBQ and large terrace with pool. Contact Arquifach, Alicante architectural studio in Costa Blanca. We are specialists in the construction of chalets and single-family homes with a modern architecture. We study the feasibility of your project and offer advice on the construction of new single-family homes or tourist apartment buildings. We are supported by a specialized team in Costa Blanca. Arquifach deals with finding the plot suitable for each client’s needs, complying with the municipal regulations. We take charge of the whole project: its design, construction, planning, pathology reports, assessments and advise in general.

Avoiding cost overruns in the construction of your custom home

Alicante Architects: How to do a Renovation of a Single-family Home or Villa