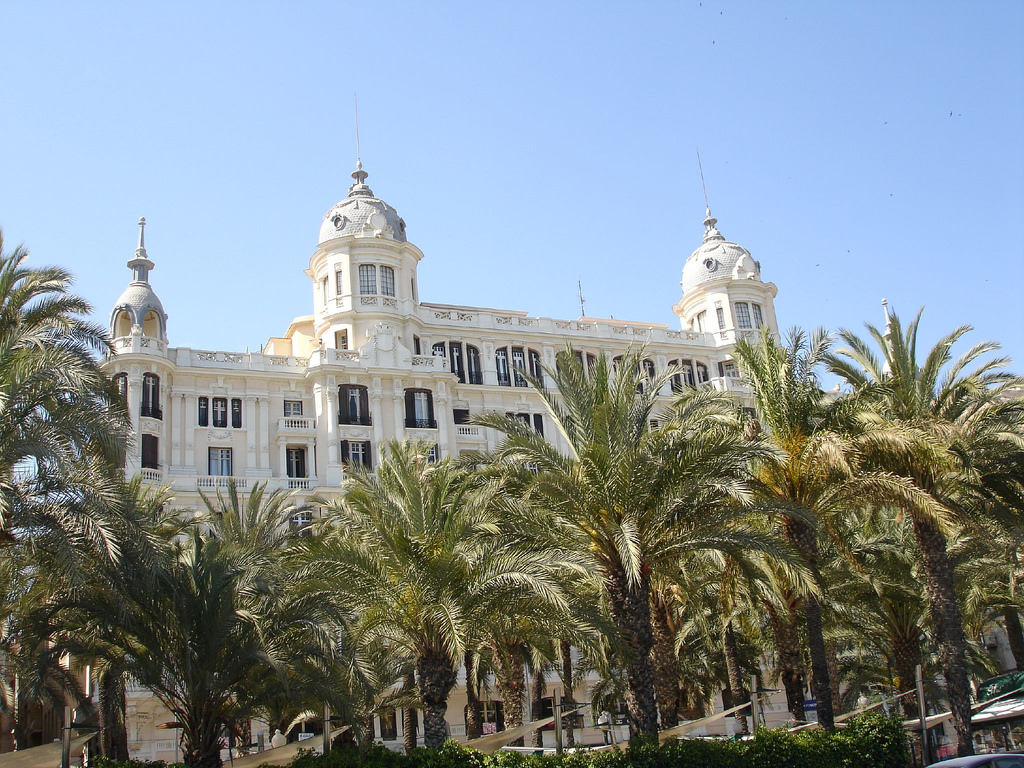 Costa Blanca is a land rich in culture that holds many architectural gems to discover. In the blog of Arquifach, architectural studio in Alicante, we will visit some of its architectural treasures, monuments and most characteristic buildings.

Casa Carbonell is an emblematic building in Alicante, located at number 2 of the Spain Promenade that occupies a complete block. It was built by J. Vidal Ramos during the 1920s at the request of the bourgeois Enrique Carbonell, a fabric manufacturer. This building represents the aspirations of the bourgeoisie of the time: ornamented facade and use of noble materials with privileged views.

Although currently it is filled with commercial premises, offices and homes; it was a building devoted to the textile manufacture that represented the bourgeois aspirations and the enrichment of the textile industry during the First World War.

Its facade is divided into three parts separated by the towers and is based on the concept of symmetry and hierarchy. Its French-style ornamentation is full of classic elements. It highlights the use of noble materials such as sandstone in the base, marble in the foyer, iron and glass in locks and canopies, or the simulated cover slate.

Currently, this building is still one of the most emblematic in Alicante and is the protagonist of a large number of tourist postcards in the city.

Due to its cultural wealth and paradisiacal essence, Alicante is one of the most chosen destinations to live or build a holiday home. It is a city that has managed to preserve its beauty and its living standards despite tourism and modern life. Alicante has a multitude of corners, villages and cozy towns where to design custom-made homes where to take root and increase living standards. With an unbeatable climate of sun 300 days a year, we can find coves, beaches and natural landscapes that can be the dreamed environment where building a new home.

Arquifach, architectural studio in Alicante, helps you design your home in Alicante

The professional team of Arquifach – architectural studio in Costa Blanca, has more than 40 years of experience in the construction, architectural and urban planning sectors and is led by architect Manuel Cabrera. Arquifach offers a 360-day service, specialized in different architectural fields, such as: design, construction, planning, pathology reports, assessments and general advice.

Arquifach, architectural studio in Alicante, accompanies its clients throughout the construction process, from start to finish. The mission of our Architectural Studio is to make the project an easy process that leads to total customer satisfaction. Arquifach architectural studio has a network of suppliers and partners to manage all projects with professionalism and efficiency.

Contact Arquifach, architectural studio in Alicante without commitment. We study the feasibility of your project and provide advice on the construction of new single-family homes or tourist apartment buildings. We are supported by a specialized team in Costa Blanca.

The Best Places to Retire on the Costa Blanca