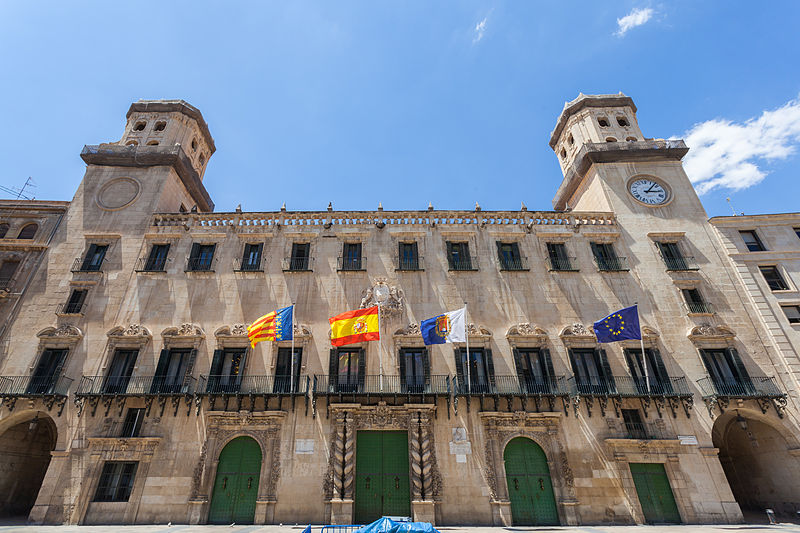 Uncover Costa Blanca together with Arquifach, architectural studio in Alicante

Costa Blanca is a land rich in culture that holds many architectural gems to discover. In Arquifach blog, architectural studio in Alicante, we will visit some of the treasures of architecture, monuments and buildings most characteristic of Costa Blanca.

We will start this section with some of the most emblematic buildings in Alicante: The Town Hall, a baroque palace of the 18th century. Also known as Council House or Municipal Palace because it was built on the old Town House that was destroyed during the French bombing. Construction works began in 1730 when the plans of the architects Vicente Mingot, Juan Bautista Borja and Jose Terol began to be executed but due to Mingot’s death, the works were delayed until Lorenzo Chapuli took the reins getting to finish the building in 1780.

It has a rectangular floor and is guarded by towers at the ends, has a height of three floors that runs along the facade of almost 50 meters long. They homogeneity of the balconies stands out, which extend throughout the first floor and the balustrade that tops the upper floor. The lower floor has five facades of different styles. The most striking one is the central door, the largest and ornamented by two Solomonic columns and which is the main access to the town hall. In the back, there is a sixth access door leading to Plaza de la Santisima Faz. Also, it has a chapel where masses have been held since 1775 and ended up being a lateral annex of one of its most characteristic halls is known as “Blue hall”, a chamber specially built for Queen Elizabeth II in 1858. Well known for being blue the predominant color in curtains, walls, furniture and even doors. Today, it is there where the ceremonies of civil marriages are celebrated in the town hall. Highly demanded for its palatial decoration with gold embroidery and large chandeliers.

As for the square where it is located, it has been called in multiple ways parallel to the historical changes of the country: Plaza del Mar, Plaza del Ayuntamiento, Plaza Alfonso XII, Plaza de la Republica, Plaza 18 and Plaza del Ayuntamiento (again).
e to know if it is possible to build on this plot, how many m2 can be built and how can it be built.

The City Council of Alicante is one of the many emblematic buildings that can be found in Costa Blanca. Because of its cultural wealth and paradisiacal essence, Alicante is one of the most chosen destinations to live or build a holiday home. It is a city that has managed to preserve its beauty and its quality of life despite tourism and modern life. Alicante has lots of cozy corners, villages and towns where to design custom homes where to take root and increase the quality of life. Its weather is unbeatable, with the sun shining 300 days a year. You can find coves, beaches and natural landscapes that can be the dreamed environment where to build a new home.

With more than 40 years of experience in the construction, architecture and urbanism fields, the professional team of Arquifach – architecture studio in Costa Blanca – is led by architect Manuel Cabrera. Arquifach offers a 360 service, specialized in different areas of the architectural field, such as: design, construction, planning, pathology reports, valuations and general counselling.

Arquifach, architectural studio in Alicante, accompanies its clients throughout the construction process, from start to finish. The mission of our Architectural Studio is to make the project an easy process that leads to total customer satisfaction. Archifach Architectural Studio has a network of suppliers and partners to manage all projects with professionalism and efficiency.

Contact Arquifach, architectural studio in Alicante, without commitment. We will assess the feasibility of your project and offer advice on the construction of new single-family homes or tourist apartment buildings. It has the support of a specialized team in Costa Blanca.

Avoiding cost overruns in the construction of your custom home