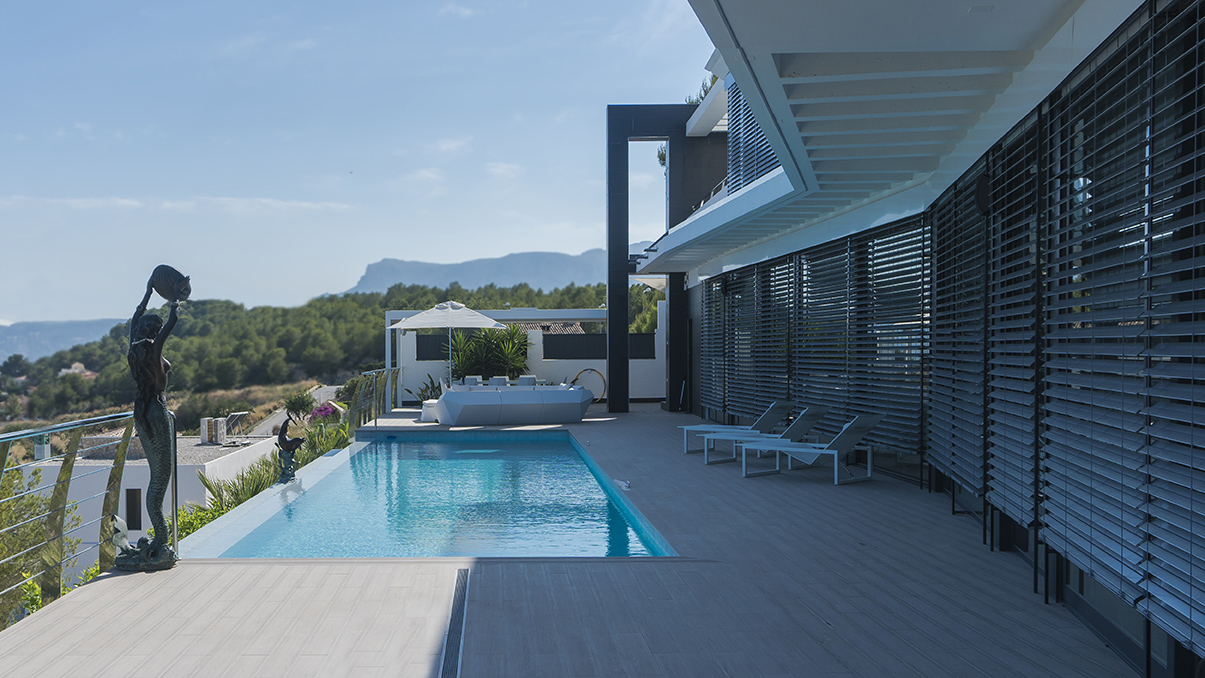 This week in Arquifach’s blog (Alicante Architectural Studio), will be talk about an issue on which we receive many queries from clients: how to propose the private pools of chalets or single-family homes with a plot of their own.

Evolution of pools in single-family homes in Costa Blanca

The quality, the type of construction, the architecture design and the needs program has been changing over the last 50 years. The tourist upturn on the Costa Blanca, and in Spain in general, began in the mid-60s when French or Northern Europe tourists began to discover a Spanish coast without constructions, with a very benign weather, a quiet country, and very cheap prices compared to its purchasing power.

Normally, villas were built as single-family homes of around 90/100m2 with an unfinished garden, interior plots of between 500m2 and 1000m2 and, of course, without a pool. Instead, the beach was the reason for the tourists to come to the coast. Most of the houses at that time have no pool or were built later.

From the 80’s, when the owner of the construction of a single-family home included the pool within its initial project. The system of construction of the pools was initially based on concrete walls, formwork, walls with filled concrete block or solid brick. In all cases, pools should have an interior waterproofing and a ceramic tile finish.

Little by little, the projected gunning or concreting system was imposed. It is made on the basis of projecting the concrete on the walls and the bottom of the pool, prior placement of the reinforcement and part of the installation to be embedded, such as sinks, impellers, spotlights, etc.

How are pools currently built?

Currently, it can be said that 100% of the pools are made through this system. Initially, a dry method based on a machine installed “in situ” which is primed by the operators with cement, sand and little water that is added during the gunning process when projected with compressed air. In some cases, other secondary components such as setting accelerators are usually added.

This mixture is projected little by little, at the speed that two operators add the materials and another one projects the concrete on the walls and bottom of the pool. This system was tedious and slow, and it took up labor for a couple of days.

This method produces a lot of dust, since the mixture is almost dry and, as it was already said, is very slow.

In the other system, the wet method, the three ingredients: cement, sand and water are mixed at the same time and the mixture is projected. The more fluid the mixture, the greater its efficiency, and a normal pool of 4m x 8m can be completed in a morning.

Can a pool be built on all soils?

The law of the Soil in Spain limits the constructions of swimming pools in some cases like those built in rustic soil. According to its definition, it is a soil categorized as common or protected. However, the regulations governing construction on rural land correspond to municipalities and autonomies. As we have already anticipated, there are restrictions, but it should not be forbidden and we must go to the Town Hall to clarify doubts. In other articles, we have already seen the importance of the urban report in the purchase of a plot.

Arquifach, Alicante Architectural Studio, helps you to get your own chalet o single-family home with a pool in Costa Blanca

Contact Arquifach, Alicante architectural Studio, without obligation. We study the feasibility of your project and offer advice on the construction of new single-family homes or tourist- apartment buildings. It has the support of a specialized team in Costa Blanca. Arquifach is in charge of finding the plot adapted to the needs of each client, complying with municipal regulations. We take over the entire project: its design, construction, planning, pathology reports, assessments and advice in general.